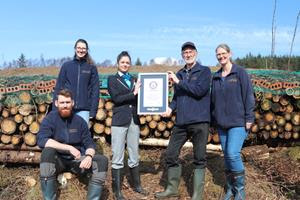 A photo accompanying this announcement is available at https://www.globenewswire.com/NewsRoom/AttachmentNg/c6d0e716-dbd2-4737-934d-660fac898b70

The 199.9 cubic metre structure is located on the Highland Titles Nature Reserve at Duror in the Scottish Highlands and already houses a variety of species. It breaks the previous world record of 89.37 cubic metres, which was held by the Polish Association of Developers in Warsaw, Poland. A photo accompanying this announcement is available at https://www.globenewswire.com/NewsRoom/AttachmentNg/8f7ca5a3-5c5c-4d71-a475-daceb2ca6aff

“This record-breaking initiative is about the environmental message,” says Douglas Wilson, CEO of Highland Titles. “We bought this land in 2006 when it was a poorly performing commercial forestry plantation of non-native Sitka Spruce.

“Like much of the Highlands, it was inappropriately planted in the late 1980s with no thought or consideration given to biodiversity. Using these same trees for something that puts nature first symbolises that the world has changed, and we hope our efforts will inspire others. We’d be delighted if someone beat our record in the future!”

Nature Reserve Manager, Stewart Borland, was part of a team of 7 who were involved in its construction which started in September 2021 and was completed in early March 2022. In addition to the environmental message, Mr Borland hopes that it encourages people to visit:

“In 2019, we had more than 10,000 visitors to the nature reserve from all over the world. The pandemic really put a dent in our visitor numbers, so we hope that this – together with the new track which is adored by cyclists – will encourage people to visit now that travel is opening up again. The more visitors we get, the more people can see the work that we’re doing.”

Highland Titles began in 2006 with a mission to conserve Scotland, one square foot at a time. The conservation project – now encompassing 5 nature reserves and over 800 acres of Scottish wilderness – is funded by selling gift-sized souvenir plots of land.

The Highland Titles community of souvenir plot owners are invited to style themselves as the Lords and Ladies of Glencoe™. Over 300,000 plots of land have been sold to date.

The Highland Titles Nature Reserve near Glencoe is an official 4* tourist attraction and, according to Trip Advisor, one of the most popular nature reserves in the country.