SHANGHAI, May 22, 2017 /PRNewswire/ — Recently, the 3rd Positioning China Summit and Ries Categoring Strategy 10th Anniversary Forum was held in Shanghai. Al Ries, a legendary marketing master and the father of the positioning theory, and Laura Ries, the successor of the theory, were present at the scene to comprehensively display ten years of consulting achievements of the positioning theory for the first time. GHS president Jason Kong was also invited as the only guest speaker from China’s TV shopping industry to share his practical experience in the positioning theory with Al Ries and his daughter Laura Ries, as well as Zhang Yun, general manager of Ries China, and entrepreneurs from domestic first-class enterprises such as Great Wall Motor, Robam and Jinmailang. 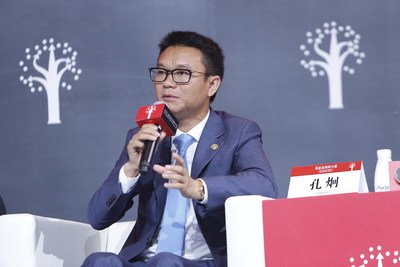 Since determining the position of “Global Home Supplies Sale Mall”, GHS has became the enterprise with the highest growth rate in China’s TV shopping industry. In 2017, GHS launched a new brand, and vigorously promoted the new visual hammer “shark”.

In the field of TV shopping, the United States, Japan, South Korea and other countries all have an enterprise mainly covering TV shopping business among the top five enterprises in the B2C industry. According to Jason Kong, GHS will keep promoting TV shopping, and expand to Central Asia, Africa, Southeast Asia and other overseas markets along the One Belt and One Road, with the goal of becoming stronger and bigger. “China’s TV shopping industry was controversial in the past. We hope we can change people’s traditional impression of TV shopping. GHS is not only initiating but also restructuring an industry, we hope to be a leader in the industry,” said Jason Kong.